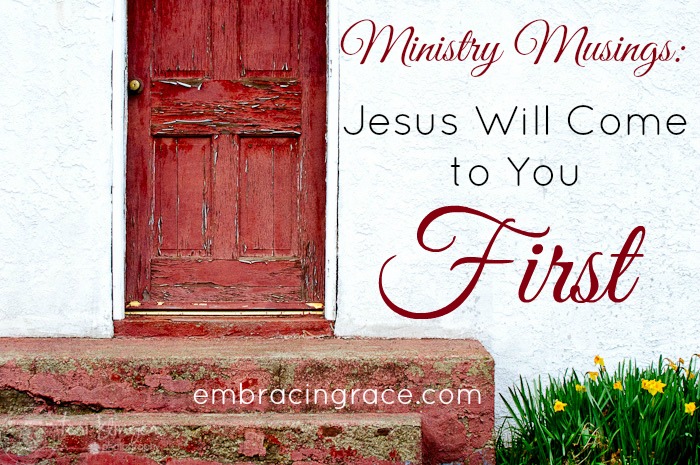 One of the most common struggles of ministry wives is loneliness. We’ve all thought it a hundred times if we’ve said it once- “I’m so lonely.” The truth? Loneliness is just part of the human plight. Extroverts and introverts alike experience loneliness, just in different ways and for different reasons, at different times, and for different lengths of time. Ministry wives are no exception. Some of us will spend our whole lives in ministry.

And…what if we spend so much time searching for a friend to dull the loneliness that we miss the One Who is seeking us?

What hit home to me was the fact that each Gospel writer tells us where Jesus went after He arose from the tomb. But not only do they tell us where- they tell us who He intentionally chose to spend time with:

Matthew: Mary Magdalene, the other Mary, all eleven remaining disciples.

Mark: Mary Magdalene {16:9-“He appeared first to Mary Magdalene, out of whom he had cast seven devils”}, Mary the mother of James, Salome, two disciples, all eleven disciples.

Luke: Mary Magdalene, Joanna, Mary the mother of James, and “the other women that were with them,” two disciples on the road to Emmaus, one being Cleopas, and the other Simon.

John: Mary Magdalene, ten of the disciples except Thomas, then eleven disciples including Thomas, and fishermen Simon Peter, Thomas, Nathanael, the sons of Zebedee, and two other disciples.

I don’t know about you, but as I observe these whereabouts of our Lord, I think of many other places He could have gone. And sadly, I think those are the places where, had we been in that same situation, we would have gone.

He could have gone straight to the palace to see Pilate, to righteously flaunt Himself and His defiance of death. You thought you succeeded in killing me. What do you think of your success now?

He could have searched out the soldiers who did the dirty work of the actual crucifixion. He could have returned the favour and killed them. Let me demonstrate who actually has the power to kill.

He could have even raised Judas, His betrayer, to life and rebuked him. Guess the money didn’t satisfy, did it? Was it really worth it?

He could have gathered all the people who didn’t believe Him before His death, and compelled them to believe. See, I told you. Believe me now?

He could have gone to the temple and gathered His own followers; He could have given a great speech about Himself and His power, and outlined His plan for them to continue His legacy on earth.

If not to those people, then to whom did He go?

He went to His friends. He needed to check on His friends, so He sought them out, went to where they were, met them each in their unbelievable places of unbelief. He walked their dusty paths, sat at their tables, stood in their gardens, came to their ships, appeared in their upper rooms, and even took the time to cook and feed them nourishing food. He nurtured their bodies while He nurtured their hearts and souls, preparing them for His coming ascent to Heaven. He arose in full memory of each of His friends, still knowing their specific needs and planning to meet them.

There are always big things going on- a natural disaster here, an epidemic there, a person dying with cancer here, a country at war there. Have you, like me, wondered {though we know it’s silly} if, how or why He would come alongside you in order to administer personal care in the exact way you need it, day in and day out?

And yet He does. This is a part of our God that we can’t begin to comprehend- that in the face of the important and the big, He is willing to come to the small. Stay as long as it takes. Feed you. Nurture your doubting heart. Open His hands and let you touch. Stir in His love and gentle grace like a gardener gently works fertilizer into the soil around a struggling plant. Cup your face in His hands and turn your eyes to His. Open them to see what He sees, after He’s fed your heart with His words.

He left the tomb.

He left the tomb and went.

He left the tomb and went to His friends.

He left the tomb and went to His friends first.

Today, in your struggle, in the aftermath of your latest battle, in the endurance of the mundane, in the shattered relationship, in the process of your grief, in the foggy complexities of your life, in the instability or heartache of your ministry, in the health issues that don’t have answers, in the ache of loneliness that won’t leave…Jesus will come to you first.

He doesn’t just have thirty minutes on His calendar before He has to leave and take care of something bigger. You are the something bigger. He’s here for the long haul, willing to faithfully tune your heart to His, little by little-

For as long as you both shall live.

Can any one of us resist the offer of eternity with our Friend? He has a void too- not a flaw or insufficiency- but one He created because He desires communion with you and I. He’s lonely for you, and heaven is too long to wait.

That’s the best part about this comfort in loneliness- It starts now, whenever you are ready.  Before He goes to anyone else, Jesus will come to you first.

P.S. A few days ago, shortly after I wrote this article, I saved it in my website and went for a walk with my children. As we rounded the cul-de-sac, I saw a neighbour sitting in his truck with the door open, and he was on his phone. His conversation was loud and clear as I approached just in time to hear him say, “Yeah, man. For sure. You gotta check on your friends!”  Can you guess how big that made me smile just then?  It was like Jesus was whispering to my heart, “See? I’m always going to check on my friends.”  Let’s embrace this with joy today…together.

For Pastors’ Wives: If you are in a place where you need prayer support and friendship with other pastors’  wives, there is a small, private group waiting just for you! Several hundred PWs are enjoying their Heart-to-Heart groups. You will find some wonderful ladies who will pray with you, encourage you, and understand you. We will look to Christ together and find hope. Send me a private message through my website and request to join. I promise, you will be blessed!

4 thoughts on “Ministry Musings: Jesus Will Come to You First”