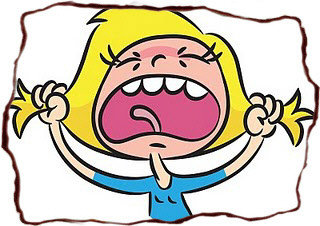 Albert Einstein penned the famous quote that we like to quip at certain appropriate times, “Insanity is doing the same thing over and over and expecting different results.”

And I suppose that if nothing else proves insanity, motherhood surely does.

For who hasn’t washed dishes {without a dishwasher} a couple thousand times, and then heaved a sigh {inside} when they piled up again?

How many times have we folded that same red shirt with that same white lettered logo, and secretly wished for it to always be clean?

How many times have we said, “No, please don’t do that” and hoped it would actually sink in this time so we don’t have to say it again?

Could we agree that this type of insanity is driven by expectations?

A few years down the mom road, we learn to let the toys abide where they land, and to allow a messier kitchen because Small Son and Tiny Daughter want to help dump the egg into the buttermilk and the cinnamon into the flour for their much hoped for muffins.

This motherhood insanity thing is a bit of a paradox.

On the human level, it may seem that washing dishes a couple thousand times won’t ever accomplish anything except clean dishes {which are nice to have!} Saying “No, please don’t do that” will just be words that left a mouth to a child who isn’t really listening as he sends his pirate crashing into the dirt of a nearby houseplant. Folding that red shirt will morph into folding a green shirt that is one size bigger, then 10 sizes bigger and he’s off to college.

And yet….there is God. And there is His plan, His way. It’s so carefully spelled out in His Word, so practically given in Proverbs. In another place in Scripture it’s “line upon line, precept upon precept. Here a little, and there a little.”

And in the midst of the seemingly insane, change happens. Prayer is answered. Biblical principles begin to take shape in the hearts of young ones. It’s there that we realize that maybe, just maybe…we are still sane after all.

We are fitting beautifully into God’s grace-filled masterpiece, wherein the repeated mundane produce the most glorious results for the faithful soul.

Ask the mother who has only feathers left in her nest.

I asked her, and she told me it was worth every moment of perceived insanity. 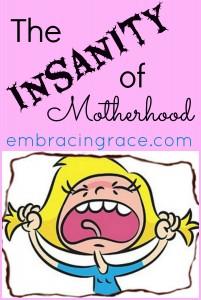 Let’s Chat: How is motherhood going for you? Do you see God’s paradox at work in your life and in your children’s lives? What are some of your best tips for motherhood? Feel free to share!

{P.S.}- Have you signed up for my monthly newsletter yet? Extra encouragement and not-on-the-blog content coming your way! ——–>

2 thoughts on “The {In}sanity of Motherhood”