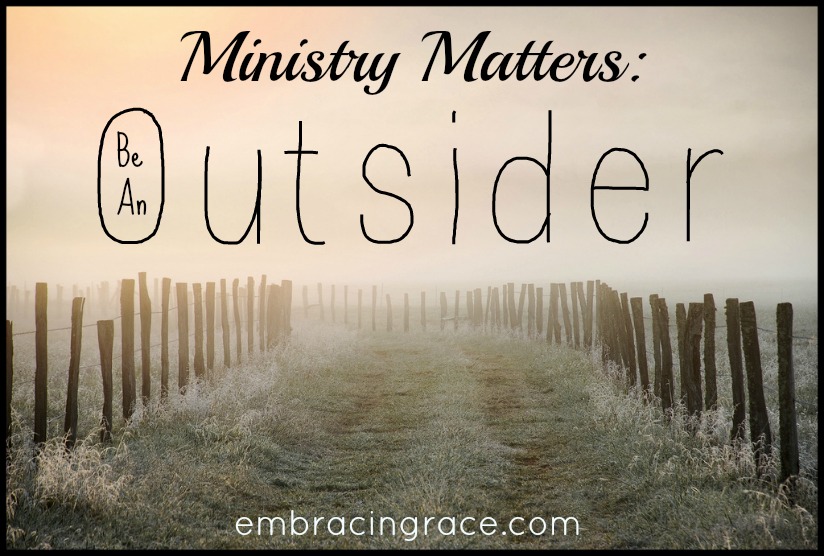 I walked past the end table in that doctor’s office, and a propped up poster caught my eye. It read in bold, impossible to miss letters:

I may or may not have stopped in my tracks, shuddered a bit, then recovered and snapped a picture of it with my phone. The idea of the poster was to urge people to get outside and enjoy the outdoor beauty all around them. But my mind went in another direction…

I remember all too well those feelings of being an outsider in ministry. Being the missionary pastor’s wife who moved 2,000 miles away from family and settled with her husband on an tiny island that jutted eight kilometres out into the ocean. Being the only ones in the church who weren’t from there. Being the only ones who weren’t related to each other in some “how on earth do you keep track of that” way. Being rare newcomers on the island that was home to just 4,000 people.

Because people were moving away, but hardly anyone ever moved to.

I’m not sure that I ever got used to being gawked at when we went to town. Everyone knew who we were. But we didn’t know them. And even after four years of immersing ourselves in the new culture, we were still the outsiders.

And we knew we always would be. Blood is thicker than water, even when you surrender your life and give your soul’s blood for people who hold you at arm’s length. So, be an outsider? Who would choose that?

“I feel like an outsider, and we’ve been here for years.” This is the cry of many pastors’ wives and missionary wives. Will it ever get better? We all wonder. Deep inside we know it won’t. In many ways, it’s par for the ministry course.

There is something to the fact that culture affects the degree to which we feel like outsiders. Having ministered in both a remote/small town place and a larger city, the different degrees are more apparent to me now. When we moved from the tiny island to the city, it was easier to blend in. And we had hindsight to teach us how to immerse deeper into the culture of our city. But the same insider/outsider issues remained in the church. This seems to be a universal issue that happens around the world. So how can we adjust and not live with that constant conspicuous feeling of never quite fitting in?

1. Remember that Christ was an outsider when He walked on earth.

No One knows better what being an outsider feels like than our own Jesus Christ. Wow, I am just so awed by the irony of what He faced when He came to earth. His own created people rejected Him. Even some from His family did not believe Him. With only a few exceptions, He was discredited, avoided, scorned, accused, watched and critiqued, not invited, betrayed and eventually killed. Talk about being an outsider! He walked that road, and He understands it well. I wonder how it felt to be an outsider inside His own creation?

Rarely is the outsider issue caused by the newcomer. Newcomers generally throw themselves into the newness and embrace the insiders. It’s the insiders that have a hard time accepting outsiders. This happens in ministries both large and small. It’s easy to constantly ask ourselves where we went wrong and what we could have done better to “inside” ourselves. The truth? Probably nothing. Churches that resist new blood will gradually revert back to the original members, and eventually that local body will die. I’ve witnessed the slow death, and likely you have too. It’s not your fault. Don’t let satan get a foothold in your heart in this area!

3. Look for other outsiders and invite them in.

By “invite them in” I mean open your heart, include them, and treat them as if they have always been in the church. In one of our ministries, we had an international university that was walking distance from our church. This brought many foreign students through our church doors every Sunday morning. My husband and I noticed that these people were slipping in and out, and being largely unnoticed. So we decided to work harder to include them. I was usually at the piano and my husband was on the platform at the beginning and end of each service. But as soon as our duties were finished, we would make a beeline for the newcomers to welcome them. Some of them even came to our home and became our friends. For one couple whose French was more advanced than ours, we invited an interpreter to join the new family when they came over. This is the neat thing and the very point of inviting outsiders in- they don’t remain outsiders. It is even better if you can get your whole church to embrace them. What outsider can resist that?! And, there’s nothing that makes you feel like an insider quite like finding another outsider. 🙂

4. Ask God to help you accept being an outsider.

Oh, how my heart hurts with you on this one. Because the loneliness of being an outsider is a road that many pastors’ wives walk for years on end. Coming to accept a place of loneliness is not easy. It takes grace. In our first four years of ministry, there was no one even close to my age and I was so lonely it hurt my heart physically at times. I prayed and begged God to send me a friend. He did not answer that request. Using hindsight, I know without doubt that He wanted to teach me to draw close to Him and find my sufficiency there.  This was something I needed to get a grasp on early in ministry. By the time we got to our second ministry, I had stopped praying for a friend. Yet God answered and gave me several women whose hearts became closely knit with mine, and still are. It lessened the outsider feeling for me. But the interesting thing was that those ladies were former outsiders too {as in, they had moved to the church from away.} So we shared some common ground.

There are so many “little” things that we are called to accept when we find ourselves to be outsiders. And this is where we have to rely on God’s grace.

Grace to smile and to be a gracious community spectacle.

Grace to be okay with being excluded from insider gatherings.

Grace to answer the myriad of questions from curious people.

Grace to be seen as just another pastor/pastor’s wife who will eventually leave…grace for when people don’t let you into their hearts.

Grace to give up the level of privacy that you desire.

Grace to walk alone when you want to walk together.

Grace when you can’t find a close and trusted friend.

Grace to be a long term outsider….grace to face the fact that it may never change.

5. Remember that you are IN Christ!

This is the most important one of all! And oh, this point makes my heart soar. What a precious promise! In Paul’s letters, the phrase “in Christ” is mentioned 165 times.  Somehow I think that God had pastors’ wives in mind when He delivered these comforts through His Word. Meditate on just a few of these:

“Now thanks be unto God, which always causeth us to triumph in Christ, and maketh manifest the savour of his knowledge by us in every place.” 2 Corinthians 2:14

“Blessed be the God and Father of our Lord Jesus Christ, who hath blessed us with all spiritual blessings in heavenly places in Christ.“ Ephesians 1:10

“And hath raised us up together, and made us sit together in heavenly places in Christ Jesus.” Ephesians 2:6

“For we are his workmanship, created in Christ Jesus unto good works, which God hath before ordained that we should walk in them.” Ephesians 2:10

“But now in Christ Jesus ye who sometimes were far off are made nigh by the blood of Christ.” Ephesians 2:13

So apparently, being an outsider is in. If you’ve been called to be an outsider on earth, that will never, ever shake the fact that you are an insider with Christ. The path of loneliness and outside-ness is close to His heart. He truly understands and He wants you to rest in the fact that with Him, you are always inside. So, dear pastor’s wife, be brave in this world, in your city, in your town, in your church…

14 thoughts on “Ministry Matters: How to Embrace Being An Outsider”