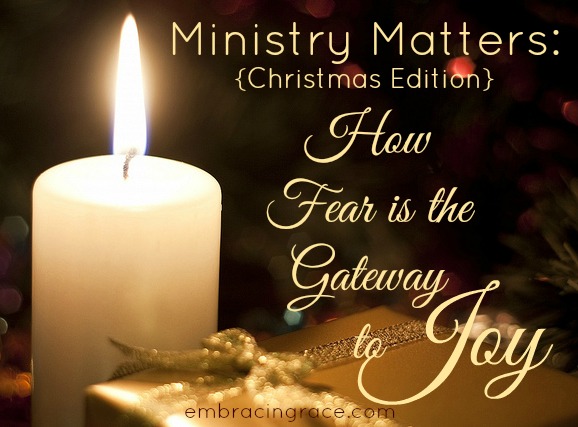 Every year it seems that God impresses a different aspect of the Christmas story on my heart in an indelible way, causing me to value His advent a little more than the previous year. This season has been incredibly rich. I’ve chosen to be mostly “unplugged” from social media and my phone in order to savour what I am learning and to let the truth of this miracle sink in a little deeper.

This year a particular emotion has stood out to me in the Christmas story- the emotion of fear. I’m not talking about fear in the sense of a phobia, as in a phobia of Christmas. Rather, I have noticed afresh how MUCH fear is woven throughout the key “role players” and details of the coming of Christ to earth:

When Zecharias saw the angel, he was “troubled and fear fell upon him.”

When Mary heard the angel’s words to her, she was “troubled at his saying.”

Joseph was afraid of the public ramifications of his betrothed being found pregnant before they had married and begun their physical relationship.

When the shepherds saw the angel appear to them, “they were sore afraid.”

When Herod heard who the wise men were seeking, “he was troubled, and all Jerusalem with him.”

No doubt the wise men experienced some fear at the realization that they would have been hunted and probably killed, had the Lord not redirected their journey home.

We read each of these events as just that- events. Part of a story, yes. But we glaze over the significance of the emotions these people felt, and perhaps we think that these were one time events in their lives. We forget that they were people just like us, with emotions just like ours. These were people whose lives were forever altered by their fearful encounters. I find it interesting to look at how each one responded to his/her fear, and how it affected their relationships:

Zacharias- a priest of God for the people, but a man who bore the weight of a lifetime of unfulfilled desire. He was so blind to hope that he let his fear stand in the way of his faith. He was struck dumb, no longer allowed to express his fearful objections. Scholars believe that he also became deaf, given the fact that people had to sign to him. God in His mercy did not retract His promise. No doubt this realization grew in Zacharias a deep joy and renewed hope in the faithfulness of his God.

Mary- a young and innocent virgin, likely happily preparing to marry the man she loved. Her life was shockingly interrupted, yet she responded to the angel’s gentle “don’t be afraid” by proclaiming herself to be the servant of the LORD.  She humbly asked her nagging question, and received a gracious answer. No doubt a thousand thoughts raced through her head about the social impact that this pregnancy would have on her life. It is no wonder that she found a haven with Elizabeth, one of the few who truly understood what was going on in her life. She walked a nine month journey of uncertainties until she had the baby Christ in her arms. And then her fearful times had really just begun- the fleeing to Egypt, the raising of a radically different child who was constantly misunderstood, the losing him on a journey, and the trial and death of Jesus. Her fears ultimately ended in the joy of the resurrection. What an emotional roller coaster of a life Mary must have led after that day the angel appeared to her!

Joseph- just a man minding his own business, literally. And suddenly there’s this news. What terror must have enveloped him as he realized the social affects of Mary’s pregnancy. How would he explain? What should he do? Would she be stoned? Should he hide her? Would people believe that both of them were still pure? A thousand questions and fears…until the angel appeared and have him the next step to take. Ok. Breathe…and still get married. But their relationship and family would never be “normal.” A holy disruption was forever part of their lives. No doubt they faced much disrespect and ridicule. We have no idea, but we can speculate with enough certainty if we just peer into the events of our own lives. Joseph’s fears no doubt continued throughout his life as the responsible father of this Jesus. He would receive more messages from angels, guiding him through his fears, and making him a vital part of the life of Christ on earth.

Herod’s fear was rooted in selfishness and an ungodly heart. I don’t want to linger here. We all know that it was a dangerous world with Herod on the throne. His fear of being usurped and replaced on the throne took over his life and controlled his brutal actions. Interestingly, his fear trickled down until “all Jerusalem with him” was troubled. His fear eventually took him to his death. He is a sad character, yes? Imagine trying with all of your resources to kill the One Who came to give you life.  Wow. It’s heartbreaking. But this was Herod.

The shepherds- dirty and smelly, the lowest of society, out in the middle of nowhere tending to dirty, smelly, and stubborn sheep. Who were they that they should get their own special message from angels? So many amazing truths here! But, in spite of the wonderfulness of the appearance and the message, “they were sore afraid.” Adrenaline rush. Heart palpitations. Sweating and trembling. Afraid they might die or go blind. But the angel soothed them and gave them the surprise of their lives. Their fear turned to exceeding great joy, thanks to the Saviour.

The wise men- learned and noble, wealthy and truly wise, inquisitive for truth and sensitive to the leading of God.  I can only imagine the fear that they felt upon the realization that they had played into the hands of Herod by innocently asking the whereabouts of the new King. But God comforted them by guiding them home and preventing them from facing even greater fear if they returned to Herod. There is a certain fear in the relief of the realization of what you’ve been rescued from in a brush with death. The fear of “what could have been.” The relief of the rescue.

{Now let’s take Herod out of the picture, and just focus on the others.}

So what is the relational significance of all of this Christmas fear? Well, no doubt you are facing fears of your own. If you’re human, you are. Just as the lives of these biblical characters were altered forever, socially and personally, so are you altered from what you’ve faced or are facing. Just as they went through amazing and traumatic events that changed them forever, so your life has changed. And just as alongside each of them was and angel {sometimes Gabriel, sometimes the LORD Himself} comforting, guiding, soothing, giving joy, the Holy Spirit lives inside you as the Comforter.

In each case, their fear was the gateway to future joy.

In light of this, what if “Fear not” really means “I’m here?” In the angel’s/God’s words to the Bible characters, I don’t hear “if you fear, you are sinning.” I hear “I know you’re feeling afraid, so I want you to know that I am here. I’m at work, and it’s all under control. I have joy for you.”

A pathway of fear is always a journey to joy.

Some of them walked a longer journey to joy than others. The shepherds found immediate joy. Zechariah, Mary and Joseph, the wise men, all had to wait to see the culmination of the message, the Promise. But the one thing they all have in common- they received the JOY.

Friend, are you walking a fearful road this Christmas? Is there a stronger presence of Christmas fear than there is of Christmas cheer? Take heart.

Christ has joy planned for you.

I can say this with confidence because of the faithful God Who has been at work in my life this year of sabbatical. I hesitate at times to speak of the depth of our own trials, fearing that I may come across as whiny or dramatic. But speaking of hope is part of my calling, and if I hide my pain under a bushel, I’m denying the purpose that God is bringing from it. The truth about me is this: I’ve had a lot of fears to work through this year, mostly ones that have sprung from the traumatic events of the last 10 years. The people who know the extent of what has taken place in our lives have been shocked at the constancy and magnitude of the deep waters we’ve navigated already in our 20s and 30s. We’re grateful to have a safe place in our counselor where we can work through the fears and find healing and hope. It’s taken a lot of gut wrenching discussions and many hours of tears and prayer- but gradually, the purpose is becoming clearer. The joy is dawning.

And for the first time in years, I don’t hear the critical voice from others or from myself, “Stop being afraid. You know it’s wrong and you’re not trusting God!” Instead I hear my Father saying, “You’re feeling fear right now. I gave you that emotion. Just trust me, because I’m in control. I’m weaving something beautiful from the pain in your life. Even in your fear, say ‘yes’ to Me. I love you. I know you’re afraid, but I’m here. Shhh, it’s ok.”

Like He knows you’re afraid. Like He knows how your own deep waters have ravaged you, devastated you, changed you forever, left you reeling  and broken and grasping for hope.

Like He wants to weave a beautiful purpose from your trauma and pain.

Because of Christ, even in your Christmas fear, you are going to be okay.

2 thoughts on “Ministry Matters {Christmas Edition}: How Fear is the Gateway to Joy”